a little about.. Corfu

Samos is the closest of the Greek islands to the Turkish coast. The distance of 1,300 metres separating Europe from Asia has been known since ancient times as “Eptastadios Porthmos” or “Mycale Strait”. Chios lies to the Northwest of Samos, Ikaria to the west, the island complex of Fournoi Korseon to the southwest and the Dodecanese to the south of the island. The town of Samos (Vathy) is the administrative centre of the municipality.

Karlovasi is the second largest urban centre, hosting the headquarters of the School of Sciences of the University of the Aegean. Pythagorio is the historic municipality of the island, where the foundations of the ancient city of Samos were laid. Its fourth largest town is Marathokampos, at the foot of the imposing mountain Kerkis. A total of 33 large and small villages and many small settlements with a distinct local style expand from the coast of the island to the mainland, which is dominated by two mountain ranges, Karvounis (elevation 1,153 m) and Kerkis (elevation 1,443 m).

From a geologic point of view, Corfu is similar to the near mainland coast. Its territory is divided in three districts by the two main mounts of the island, Pantokrator and Ten Saints (Hagioi Deka).
Corfu’s coastline spans 217 kilometers. The North coast of Corfu is very irregular, that’s why here you can find a lot of bay and small promontories while, as you go down to the South, you can find a more regular environment with long sandy beaches.
The Old Town of Corfu lies at the extreme North Western end of Greece. However, in its past, it had been for centuries part of the Most Serene Republic of Venice (15th-18th c.), as well as part of the British Empire (19th c.). This legacy has endowed it with an invaluable architectural heritage of Western influence that is still admired today. Its massive Venetian fortifications helped it withstand numerous sieges, making it arguably one of the few areas within the territory of Greece, never to have been occupied by the Ottomans. 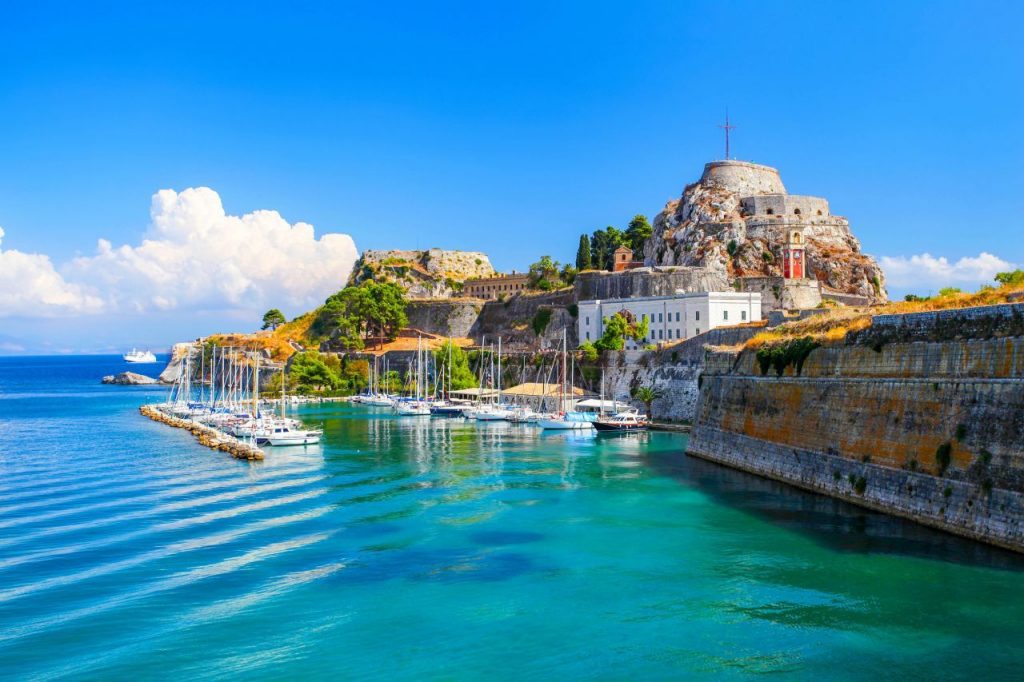 Within these protective and restrictive walls, the residential architecture of Corfu had to make use of all available land, leading to dense, multistory buildings, with a unique character. The town’s buildings are a rare example of a style of architecture that developed in Greece, that was directly dependent on contemporary western trends, the Renaissance and Baroque styles and progressed smoothly and without abrupt discontinuations to Neoclassicism. Its churches with their mixed style are yet another manifestation of the coexistence of the local Greek Orthodox population with their western European rulers.