a little about.. Gjirokaster

Gjirokastra is settled in the South of Albania and stands on the steep slopes of the Drino River valley, in a conquering position upon an historically enriched view, the borders of which are outlined from high mountain’s peaks. This is the city of “the thousand scales” that includes hundreds of tower-houses of ottoman style with peculiar stone roofs, wooden balconies and stone walls, now and then bleached with lime. Dominated from the great castle that arises in a steep hill, Gjirokastra is a magic city with a troubled past.

Through all its history, Gjirokastra has been an important administrative, economic and cultural center and a point of reference and efforts for cultural emancipation and independence for the whole Albanian world. In the course of centuries, the city experienced imposed transformation, from the bastion of feudalism, in an ottoman jewel, from a center of resistance for independence and important point for the Italian fascist invaders. In the cronics of this city has been registered many rulers and invaders;

meantime is the one who has inspired many poets, writers and artists. The city with a population of 40 000 inhabitants, today is the biggest cultural, academic and administrative center of the southern region, as a center of the county with the same denomination. It is known as the birthplace of three weighted personalities in the history of Albania: the former communist dictator Enver Hoxha, the linguist Eqrem Çabej and the great writer Ismail Kadare.

The traditional neighbourhoods extend like rays around the castle with their respective denominations: Cfakë, Dunavat, Manalat, Palorto, Varosh, Meçite, Hazmurat, Old Pazar. Ther early history of the city is relatively unknown. Due to the proximity with classical and Hellenistic centers: Jerma (Antigonea) and the roman city of Hadrianopolis near Sofratik village, is often thought that the most ancient settlement in Gjirokastra is the medieval castle. This thesis anyhow has encountered doubts because the discoveries inside the castle have brought to light ceramic in 4 different phases of residence before the ottoman period: in 5th – 2nd century B.C; 5th – 7th A.D; 9th -10th and 12th – 13th. The earliest from this phase brought traces of a considerable wall built with blocks, which make you think that in this part of Drino River an important fortification before the Roman period has existed (befor the 168 B.C).

Gjirokastra bears outstanding testimony to the diversity of urban societies in the Balkans, and to longstanding ways of life which have today almost vanished. The town planning and housing of Gjirokastra are those of a citadel town built by notable landowners whose interests were directly linked to those of the central power. It also bears outstanding testimony to various types of monument and vernacular urban housing during the Classical Ottoman period, in continuity with the various Medieval cultures which preceded it, and in a state of peaceful coexistence with a large Christian minority. 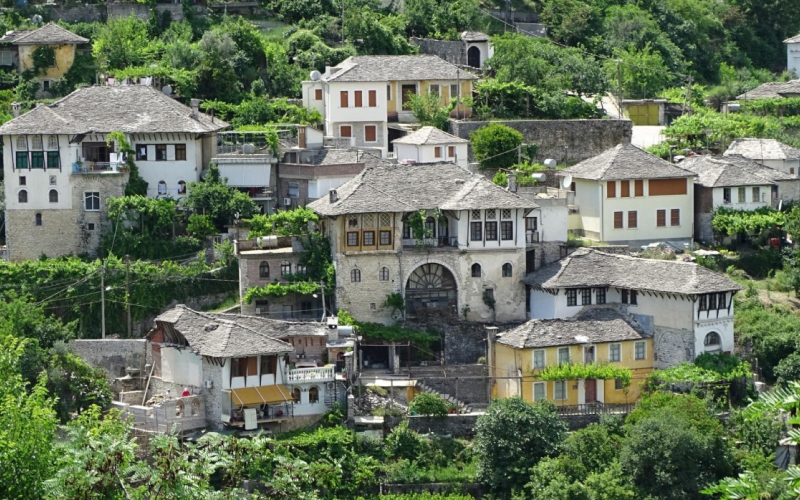 Gjirokastra, features a series of outstanding two-story houses which were developed in the 17th century. The town also retains a bazaar, an 18th-century mosque and two churches of the same period in the part of the Old Town, the castle (the first settlement) and the Ottoman-style quarters, built on crests, coming from the castle to the valley basin, where there are contemporary buildings and the University complex